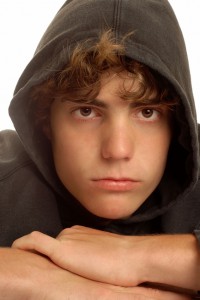 Webster’s Dictionary defines bullying as “to overawe by threats and taunts” “to treat with persistent petty cruelty; to domineer over; to coerce” and a bully as “a cruel
and boastful oppressor of the weak”.

Spreading rumors, name-calling, excluding others, and embarrassing them are all forms of social bullying that can cause serious and
lasting harm.

One psychologist says on his website that bullying is a normal social interaction that happens in every relationship. However, he limits the definition of bullying to teasing and the kinds of things we think of as social dominance. While bullying may be common, it is not normal and you don’t have to accept it.

There is No One I Can Talk To…

(*names have been changed)

At thirteen, growing up in a small rural community, Sophie’s rebel sister cut a wide swath through the community. While the two sisters were very different, it still gave Sophie’s classmates a reason to single her out and torment her. Each day at lunch, she sat alone. During the meal period a folded piece of paper would land in her food, amid giggles, hoots and laughter. It would start with “Sophie is:” and then list awful names, swears and cruel comments about her looks, hygiene, intelligence and social skills. When she took the note to her parents they told her she would have to learn to deal with this kind of thing and in future to throw the paper away quickly so a teacher wouldn’t accuse her of writing it. Throwing the note away and ignoring the actions did not help. Another note appeared at every lunch period for most of the school year. When she mentioned it to a teacher, he asked what she had done to earn that treatment. Her protests were silenced with examples from her sister’s activities; if she was a trouble-maker Sophie had to be, too. If it hadn’t been for her dogs, she might have gone through with her thoughts of suicide. She felt like the biggest dork in the world and she was sure she was the ugliest girl in class. It was a truly miserable year that did not end until she convinced her parents she could improve her chances for a scholarship if she changed schools. At the new school she had the fourth highest class average, was a cheerleader, and played in band, and on the girls’ soccer team. 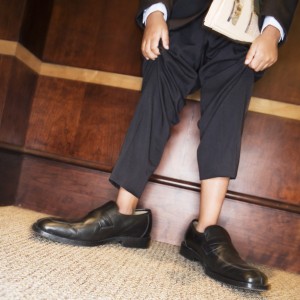 A good friend and someone I highly respect sent me a Facebook message when I asked people to define bullying. He was teased for his big ears, thick glasses, and tall, gangly form. Classmates lay in wait for him every day after school to beat him up. He ran as fast as he could to avoid them and the trouble didn’t stop until he told his parents and they enrolled him in a different school. He was lonely, scared and despised himself because he had big ears, thick glasses and was tall and uncoordinated. His only solace was in books. During that year he hid in his room and read, and read, and read. It made him an outstanding student and led to scholarships and a professional degree his parents never could have afforded. He has made it his mission as an adult to identify kids he thinks are being bullied and help them through the situation.

You Don’t Dictate My Friends

John was in second grade. He and Tommy and a couple of other boys spent every recess playing “horse” until Andy got involved. Andy told all the boys they had to stop being Tommy’s friend or he would make sure they had no friends at all. John was only eight but he didn’t like being told who he could and couldn’t be friends with. John and Tommy continued to play horse together, just the two of them, and true to his word Andy made sure no other boy would participate. But that wasn’t enough for Andy. One day he stole the ball. John ignored the taunts and started to walk away. Andy ran up behind him and threw an arm around John’s neck. John had been taught self-defense. A few well placed elbows and Andy landed on his rear-end in front of his buddies that he was trying to impress. The teachers rushed over and when the dustsettled Andy ended up in a lot of trouble. John and Tommy remained friends. Even after they went to college, each could call the other and get help on a moment’s notice. 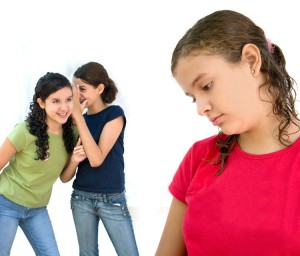 The BFF that wasn’t

Mary wanted to be popular. She got involved in activities and started hanging out with some kids who seemed to be having a lot of fun. The norm of the group was to sleep around. Afterwards Mary felt pretty bad about herself and changed how she acted and who she hung out with, but the damage was done and a lot of her old friends avoided her. To make matters worse, Jen, her BFF from last year, stood in judgment of Mary and posted horrible things, mostly exaggerations, on Facebook about Mary. Mary’s mother tried to talk to Jen’s mother. Instead of helping, Jen’s mother exaggerated things even more and spread the word to all the parents of Mary’s friends. Mary and Mary’s mother un-friended Jen, Jen’s mother and anyone who helped grow the rumors. They posted daily things that Mary was doing that were positive. It took a while but Jen changed schools and Mary is carefully building a new group of friends. When asked about the old postings, she tells the new friends, “I made some mistakes but don’t believe everything you read posted about me on Facebook.” She said it is a great way to sort out who will be a real friend and who will run away when you need them the most.

Bullying has been Around a Long Time

Sophie and Joe’s stories happened over 40 years ago so bullying has been around for a very long time, but it doesn’t make it right or fun or something to accept. Sophie, Joe, John and Tommy ended up being better, stronger people after living through the bullying experience, but none of them had fun at the time, all of them considered suicide, and all of them believed they were second class citizens. In each case, the problem didn’t solve itself. It took adult intervention to make it go away.

What Happens to Bullying Victims?

The danger in bullying is the victim usually takes one of three paths – self-destruction or revenge or endurance. The first two are not the solution.

Hurting yourself isn’t the answer; how does that hurt the bully? It doesn’t. If someone is so self-absorbed as to get pleasure out of tormenting you, chances are they will feel more powerful and be even more abusive to the next victim if they drive you over the edge. If you won’t hang in there for yourself, then do it to protect the next person from the bully. This will end.

If they post nastiness on your Facebook page, start a list of things your family, friends, teammates have said you are good at, even if you don’t believe they are true. You don’t have to post it, just un-friend the person posting the mean comments. If they post to a friend’s page message the friend you are un-friending them because they let the bully say bad things about you not because you dislike them. Then do it. Better to have two good friends than 500 people tearing you down. Can’t think of anything good about yourself? Look into your pet’s eyes and know you are loved and needed just as you are. Talk to someone. If you can’t talk to your friends or parents or teachers or coaches or clergy try this number 1-800-273-TALK (1-800-273-8255).

Revenge doesn’t pay and usually backfires. You think bullying is bad in school, what do you think it will be like in prison? Take matters into your own hands and go after the bully and if you are lucky, you will end up in a jail cell; if not you can end up dead and that is not an improvement.

Aggressive physical behavior on your part makes the bully a hero and you a pitiful weakling without the brains to get help. Is that how you want the world to think of you for the next 60 years? Think about it. You are planning violence because a jackass is making fun of you in front of maybe 30 cowardly kids, who in a couple of weeks they won’t even remember the incident. If you react violently, millions of people will remember you as evil for the rest of their lives.

You have a choice; learn from others’ cruelty what not to do or become a permanent victim without ever knowing all the joy the future can bring. What are your dreams? Hang onto them and work to make them happen.

All of the people in the examples above followed the path of endurance. They avoided the bully as much as possible and focused on the future. Yes they were still picked on. Yes they had to get help to resolve the situation. Yes they were better people for having faced the adversity and survived. That is key, survive, don’t give up or turn bitter.

What to Do About a Bully

A search of the web provides several websites giving teens direction on how to handle being bullied. Some of the recommendations are similar, some of them are different. Look at them and see which advice best fits you. No two people are alike so no one system works perfectly for everyone. If they did there would be only one website and way of handling things. Here are two that seem to make sense but they may or may not be the answer for your situation.